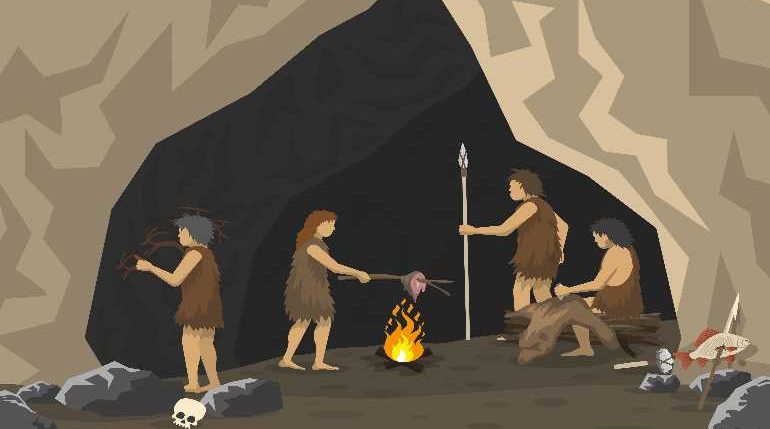 Haven’t we all heard our grandparents say, “You know in our time back in the day…..” and that’s about the time that you zone off, right?! Typical quotes:

“In our times, we used to walk 5 km to reach our school.”

“Those days, we didn’t even have proper shoes to wear”

Fact of the matter is that our ancestor’s lives were even tougher than what they narrated to us. But do remember that these are the people from whom we have inherited most of our physiology, instincts, needs, likes and dislikes that we tend to think are our own but all our physical and mental qualities are the result of a long history of survival and necessity. Come to think about it, only about ten generations have passed since the Industrial Revolution began to make far reaching changes in our planet. For about four hundred generations before that, for approximately ten thousand years all the humans on the planet lived primarily in agricultural societies where we stayed put in once place throughout our lives, raised crops and domesticated animals but actually lived a higher quality of life than we do today. Think about this: For about 72,000 generations we were hunter-gatherers! Put another way, if all the time that humans were on this earth equalled one year, then the Industrial Revolution would have happened in the last hour of the year, our agrarian period would have been less than two days and the hunter gatherer period would have been 363 days.

So do you think that what you need to be happy and healthy can be determined only by the fads and products of the last two centuries?! In the last few decades? In the last few years? Or weeks?

So it become important for our own understanding of who we are and what we need in order to be healthy that we divide the human family photo album and carefully inspect the environment of our esteemed forefathers. What was life like for these hunter-gatherers? What kinds of foods did they eat? How did they spend their days? What behaviours allowed them to survive and eventually bring us into existence.

A Day in the Life of Your Ancient Ancestor

He rose with the sun that brought light and heat to the morning. There was no concept of time, just the slow passing of the light, full moons, the repetition of the seasons, and the birth and death of living things around him. This was the nature of things and he was at peace with it. He stoked the embers from the previous night’s fire, added wood from the pile that the children had gathered and rekindled the flames. The rest of the tribe was also rising along with him. There was work to be done. If the group had been successful in finding food in yesterday’s light, they all gathered and ate the rewards which consisted of nuts, berries, fruits and wild vegetables. One of the children has found the carcass of a dead deer and a group of other children had gathered around what the predator and the birds had left behind. This was a treat that everyone enjoyed around last night’s fire while the child proudly narrated the story of how he happened to find the deer.

As the sun arced over the sky, your ancestor and most of the others walked, looking for food. Since they were traveling farther and farther in search of food, they would have to move shelter again. The days were getting shorter and the climate was becoming colder and they would move to a location where there were small animals and more roots and of course more shelter from the winds. He liked watching his children growing and contributing more and more to the tribe. The children were raised by the entire tribe and responded to all who guided them especially the older women. Their mothers were some of the strongest and fittest walkers and most successful food gatherers and food finders in the tribe.

When an event occurred, it was recognized by all, be it: a birth, a death, a rite of passage, the discovery of a better food area, good weather etc. The tribe came together and would often sing and dance together as a group. The group was the most important thing. The unwritten diktat was that as an elder he must do whatever he could do to help the tribe as a whole. He once remembered a grave mistake that he had committed in his youth – hoarding food during a meager time – for which he had been exiled from the group. After that he had sworn never to commit that mistake again.

After spending the entire day, walking and gathering food, he looked forward to being with everyone else around the fire, hearing stories of the old and young – particularly stories about the old. He was close to being an elder himself and tried to learn as much as possible from the current elders so that he could narrate stories of their history and ensure that the tribe was safe and healthy at times when they needed his guidance. He had learned to observe – to notice any changes in the behavior of the brother and sister animals, fishes and birds that might indicate a threat to availability of food. He had learned to keenly observe nature, the clouds, winds and temperatures to predict storms. He was one of the most successful in the tribe at finding food. He could build or find shelter whenever the tribe needed it. These were the skills that were most important for the survival of all. He was respected by all and he did all he could to ensure that he never let the tribe down.

A Peek Into The Past

So what can we learn from the habits of our ancestors to make our lives healthier and more meaningful and happy.

1. Our ancestors worked hard for food and moved a lot.

What you can do: Ditch the new trend of ordering groceries online. Walk to the supermarket and carry some loads. Make small trips every now and then instead of one trip where you buy everything for the entire month.

2. Their diets consisted of mainly fruits, wild vegetables, nuts, fish, meat from a small animal or leftovers from a predator’s kill.

What you do do: Include more fruits, nuts and berries in your diets. Increase your uptake of vegetables and consume them without overcooking them and thus killing off it’s nutritional value. Consume more fish and meats but be careful of the amount of toxins, growth hormones and other chemicals and antibiotics that invariably find it’s way into the bodies of processed and farm-raised livestock.

3. Our ancestors relied on their memory greatly as they had to depend on remembering locations for food and water. Their lives depended on it.

Stop relying too much on smartphones and the computer to do the remembering for you. Resume using your brain to remember atleast your close friend and family’s phone numbers. You will be surprised at how powerful and agile your brain is and as with everything else in your body, more usage leads to optimum ability and optimum efficiency.

4. Processed food such as flour and sugar other than those found in natural foods was alien to their physiology.

Need we say more. Reduce your consumption of white refined sugar and white bread as much as possible. It can only be bad for your health.

5. Time had little meaning beyond the seasons, the cycle of the moon and the availability of food. Our ancestors were intimately tied to the rhythms of nature. They woke not to alarm clocks but to the light.

6. All communication was oral and face-to-face.

Cut down on emails, social media websites, phones and messaging apps. Spend more time with real people face-to-face. It’s what we have been doing for ten thousand years except the last ten years!

7. Stress was only created when it was time to hunt or be hunted or the potential threat from strangers, storms and famines. When these threats were not present, life was peaceful and in harmony with nature.

Look around you. Is there a hurricane or a storm building up around you that can wreck your house and your family. We are talking about a real storm not a financial or an emotional storm. Is there a murderer or someone who causes a real and present danger to your life or your loved ones? We are talking about a real murderer and not the bank loan officer or your boss! Chances are that these dangers are not around 99.9 % of the time in your lives. So why worry?!!

8. Olders in the tribe were not marginalized but rather celebrated. Old age was revered and respected and associated with high stature. Lucky indeed was a tribe that had an elder in their midst to advise them when the tribe was challenged.

Let us revive this culture and care for the elderly amongst our family and in our society. We have indeed much to learn from their experience.

We are happy indeed that our ancestors survived in a different environment because if they hadn’t, I would have been writing this blog article and you wouldn’t be reading this! We would not have existed. Everything that our ancestors did had a survival purpose: having connections with others helped them survive, constantly moving and searching for food prevented starvation, having a purpose that involved the greater good of the tribe helped all the tribe members survive and caring-and-sharing behaviour and the conception of nurturing of children helped the tribe survive and flourish as a race.

Although our world is radically different today from those inhabited by our ancestors, we still maintain the same basic makeup that helped them adapt to and survive in their world. Ask yourself?

Are you doing everything in your capacity to ensure the survival of the future generations or are you just being selfish and hoarding everything only for yourself?

Latest posts by Atin Dasgupta (see all)
Share this...

Unable to communicate with Instagram.
Call Now Button
Powered by