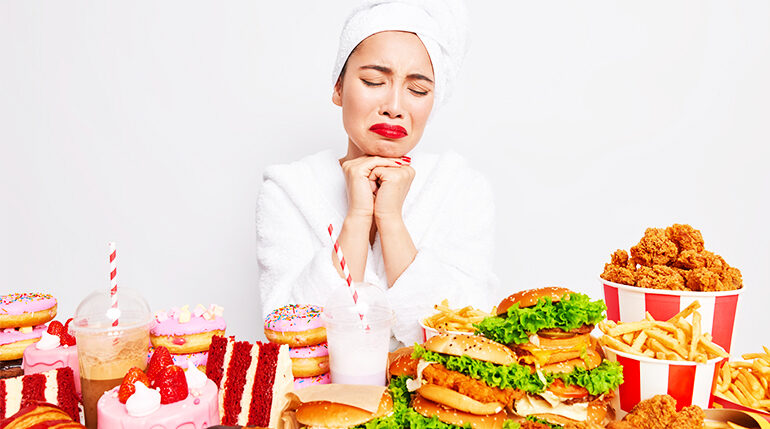 Hunger is the devious factor that often tends to ruin most diets. While one might be able to handle the famished feelings for a while it is impossible to keep it up in the long run. The result? You end up bingeing on anything and everything edible.

Most people believe that the only way to lose weight successfully is adapting a starvation diet or a diet which requires minimal eating. Yes, it is common for people to turn to low-calorie, nutrition-deficient diets for quick weight loss, unaware of the havoc it can play with our bodies in the long run. Before we know it, this becomes a vicious circle we cannot seem to escape.

How the Brain Tricks You into Eating

While many people eat to live, most people live to eat. We tend to forget that not all food provide the nourishment and nutrients required by the body for survival. We often tend to turn to food when we are stressed, tired, bored or even angry. As human beings we have evolved in such a way that food has become an escape for so many today. A part of this behavior could be credited to history, where human beings didn’t get food very easily and so, when they did, they got into a habit of stuffing themselves out of fear of not getting any for the next few days to come.

Research shows that this may be a habit that has been locked in the brains of human beings even today. Busy lives in metropolitan cities, and 14-hour work days have caused us to eat round-the-clock and at any hour of the day or night. Stress, when takes over the brain, causes the body to crave high-calorie, high-sugar foods. This is because the production of the stress hormone depletes the body of energy, causing blood sugar levels to drop as a response to the fight or flight response triggered by the brain. When the brain triggers the stress hormone, Cortisol, to be released into the blood in an attempt to increase insulin by increasing blood glucose levels in the body, we feel the need to grab the first high-sugar, high-carb snack in sight. When this becomes a habit, we tend to reach out for food the very moment we’re faced with an uncomfortable situation in life or at work.

Thus, in order to achieve a healthy body, one must learn to change old patterns and behaviors, and learn to associate food with hunger and not with emotions.

How The Body Tricks Us into Eating

Once we learn how to associate food with hunger and not with emotions, we develop a stronger willpower against unwanted feelings and excess food. However, at times, even physical cues can trick us into eating when we are actually not hungry. Thus, understanding our body’s physical signals is as important as understanding the emotional ones. 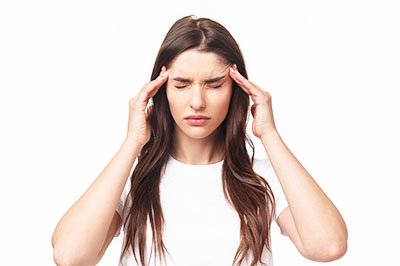 Stated below are five physical factors that can cause us to think we are hungry:

Ghrelin is a protein that is secreted by the stomach and intestines. The levels of this protein rise when the body hasn’t received food for a very long time. Lack of sleep can also lead to an increase in the ghrelin levels.

Research suggests that one of the most effective ways to battle hunger caused by an increase in this protein is to maintain a sleep diary, keeping track of the number of hours of sleep an individual gets every night. It is recommended one get at least eight hours of restful sleep to keep hunger triggered by ghrelin at bay. While a decreased level of ghrelin makes it easier to lose weight, research has also suggested that women who lost a considerable amount of weight showed an increased level of the protein. This made it substantially harder to keep the weight off since they were hungrier after as compared to before shedding the excess weight.

The key to battle an increased level of the protein is to work hard to keep the weight off for at least three months, after which ghrelin has shown to reduce naturally. In order to keep the protein in check, 5 to 6 small meals throughout the day have been recommended as small, frequent meals have shown a reduction in the secretion of ghrelin.
Insulin, cholecystokinin and glucagon are hormones that provide the feeling of satiety upon the consumption of food. Protein and carb-rich foods have shown to reduce ghrelin levels by increasing these hormones. While fats slow down the process of digestion, keeping the stomach full for a long time, fats by themselves have been shown to be ineffective in maintaining lower ghrelin levels. Hence, a blend of proteins, carbohydrates and fats is recommended to initiate a level of fullness, thus keeping the ghrelin levels at bay.

Insulin is a hormone that is released by the pancreas in the blood as a response to the rapid ingestion of glucose from foods that are high in sugar and carbohydrates such as chocolates, pastries and sweet dishes. Research has shown that a rapid spike in insulin levels produces feelings of increased hunger and cravings for high sugar foods which causes us to feel hungry soon after the consumption of a piece of chocolate cake. While insulin levels are not released in the same proportion in all bodies, some people do have a lower tolerance for high carb meals. Women with pear-shaped body types are usually seen to be more tolerant to high-carb meals and so they have a lower insulin response. While women with an apple-shaped body type can control the insulin response by eating small frequent meals.

Glucose is the fuel that drives our bodies to function. While the body naturally produces its own glucose, it also receives some from the carbohydrates and proteins present in the foods we ingest. The body tries to maintain blood glucose levels as the brain relies entirely on glucose in order to function optimally. Hunger tends to strike when blood glucose levels drop. The normal range of glucose levels in the body differ from one individual to another. A normal blood glucose range would be anywhere between 80-100 mg per 100ml of blood.

Anything below 80 mg means the body is slipping into a state of Hypoglycemia or low blood sugar levels, and anything exceeding 100mg sends the body into a state of Hyperglycemia or high blood sugar levels. Most women tend to display symptoms of hunger and irritation when their blood glucose levels drop as the glucose levels begin to drop approximately 3 hours after a meal. Levels are seen to drop dramatically after a meal rich in carbohydrates due to the secretion of high levels of insulin by the body. One of the quickest and most effective ways of balancing glucose levels is eating small meals containing carbohydrates, proteins and fats every 2-3 hours. 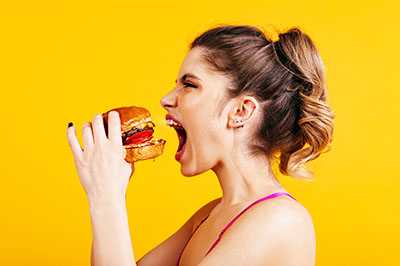 A change in body temperature can have an effect on the appetite. As the temperature falls, hunger tends to increase. This is one of the reasons we tend to get hungrier during winters when we tend to reach out to higher calorie foods.

The brain controls four main neurotransmitters that play an important part in digestion and weight control. These are dopamine, GABA, serotonin and acetylcholine. When produced at a balanced level, these neurotransmitters help the body run smoothly and efficiently on all the energy it gains from food. However, when these chemicals are too high or too low, the ability of the body to control weight and metabolize food is compromised.

Dopamine is responsible for controlling the ability to maintain metabolism in the body. At its normal levels, the food we ingest is quickly and efficiently digested and it is easier to lose weight. The chemical also plays an important part in controlling willpower, which means one is able to step away from temptations easily.

Acetylcholine is responsible for determining our brain speed and provides lubrication for the muscles, bones, and joints. When Acetylcholine levels drop, the body begins craving fatty foods to provide lubrication. Thus, when feeling mentally down or low, one must pay heed to the choice of food, opting for good fats over bad.
GABA or Gamma-aminobutyric Acid, is a biochemical that controls the way any piece of information is transmitted from brain to body. Low GAMA levels trigger the onset of stress and anxiety. Foods rich in Vitamin B, such as dry fruits and beans, have been proven to boost GAMA levels.

Serotonin provides the body with restful sleep. Low levels of this biochemical can cause depression resulting in emotional disturbances, over eating and weight gain. Antidepressant medication is then used to re-balance the levels. Some of the best sources of Serotonin are poultry, fish, cottage cheese, eggs and beans.

Hope this article has shed some enlightenment on changing old behaviours and patterns and help you to learn to associate food with hunger and not with emotions!

Aellina
Fitness Writer at Wellintra Fitness
Aellina has an impressive amount of experience in the field of education, teaching, and fitness. A poet at heart, she didn’t expect to become a writer, but “life can surprise you”. She is also a movie buff who loves to play the keyboard, and sing and dance to almost any genre of music. On a dull day, she prefers to plug in her earphones and “walk it off”. According to her, the best poems are the ones written in the wee hours of the morning. If you’ve played an integral part in her life, chances are, there’s a poem about you hidden in her closet somewhere! 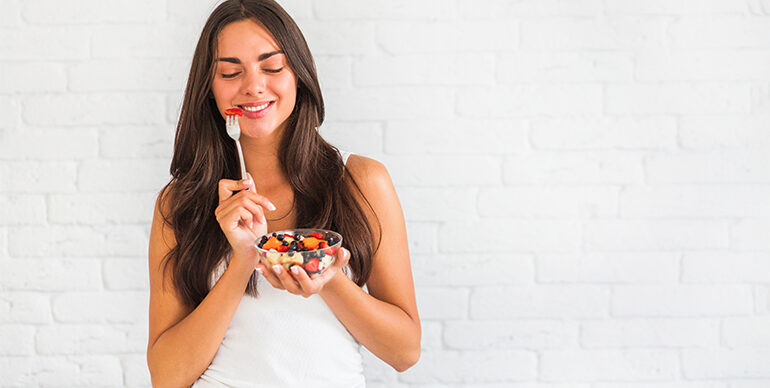 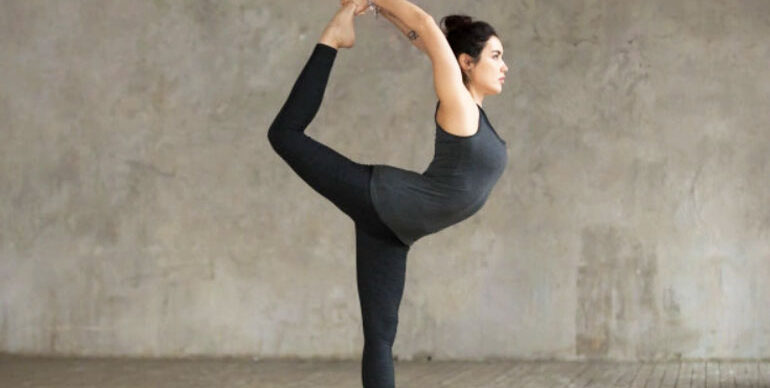 Introduction to Body Sculpting
Sculpting can be referred to as another way for toning which means getting the body in better shape. The Benefits of Sculpting Body sculpting exercises are highly recommended by fitness experts as Read More »
October 19, 2021 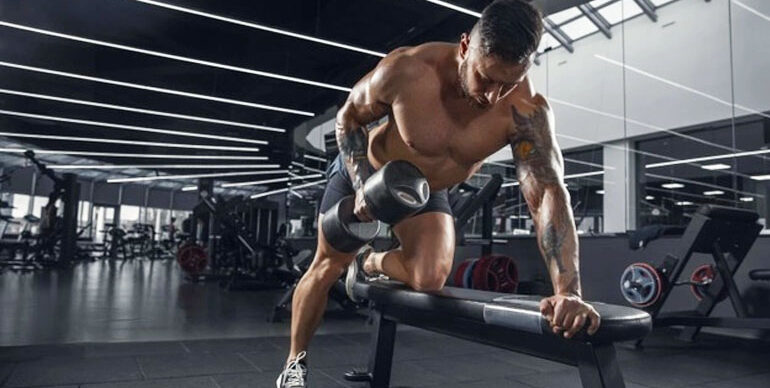 Plan Your Way to A Better Body
Getting in shape, toning or losing weight can often be a daunting task. Which is why, in order to achieve the desired results and goals, goal-setting is important. Self-improvement is only possible Read More »
October 16, 2021 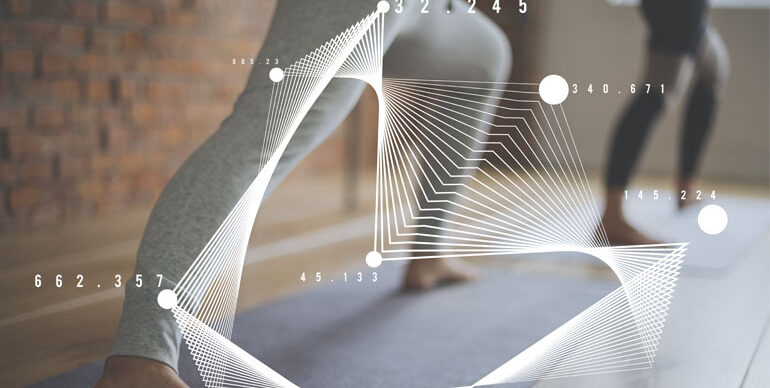 How Fit Are You?
Before beginning any exercise program, it is important to establish one’s current fitness levels. This enables us to be able to choose the intensity of workout and set an achievable goal. Assessing Read More »
October 9, 2021